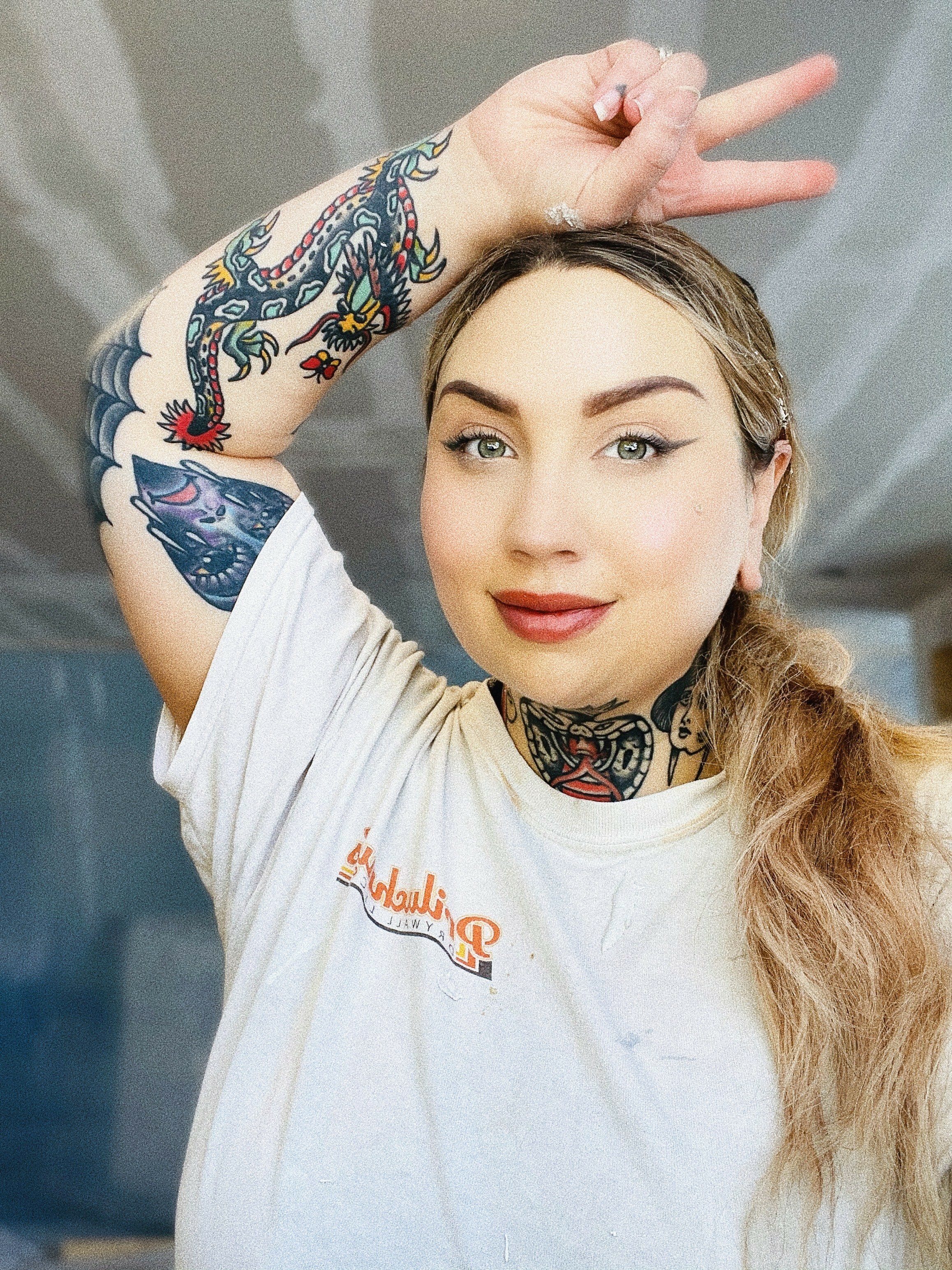 A few years back, Britt Priluchnyi was considering a huge career change. She still had a lot of passion for the work in which she received her education — Britt, born and raised in Tennessee, studied business management — but a new passion was being sparked for a trade she’d soon throw her whole heart and soul into: drywall finishing.

Britt’s husband, Jeka, is a seasoned finisher himself, a Russian drywall pro who needed a hand on the customer service end of his drywalling business. (While he’s a wizard with a taping knife, Britt tells us making chitchat with clients wasn’t exactly his forte.) Britt came on board with the Maine-based Priluchnyi’s Drywall to put her business skills (and people skills) to work. This would, soon enough, blossom into a 50-50 business partnership between the husband-and-wife team and a full-on love affair with the art of drywall.

“I also do the drywall work as well. My husband does not enjoy the customer service part of our job. He's getting into it a little bit more and more every day. Our last name, Priluchnyi — my husband is from Russia, and in Russia, small talk isn't really a popular thing. But I love that part of it! That's basically what I did beforehand: I always worked in business management and stuff. It's nice to be able to use this in my own business and also do my newer passion of finishing.” 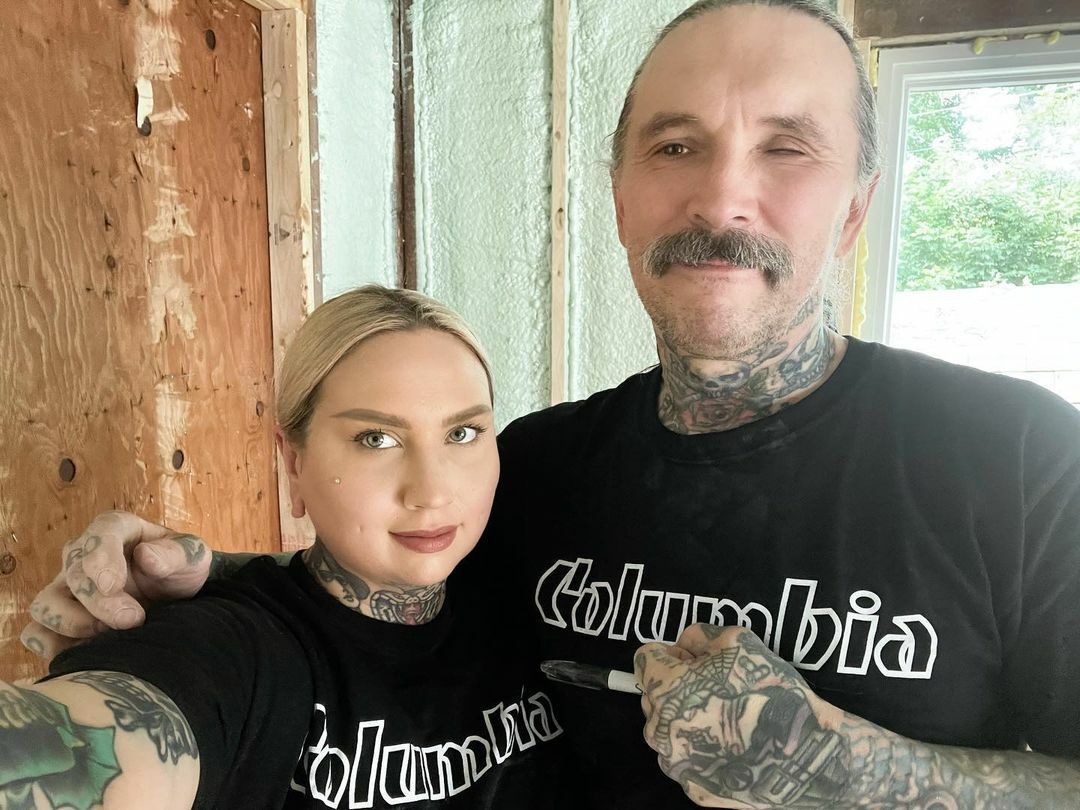 In her husband, Britt also had a mentor, one who wouldn’t pull punches if he thought her work wasn’t up to par with his high standards. This led to a training process that could be “really rough,” says Britt, but it also pushed her to work harder and get better at her craft — and once she finally started getting lots of compliments on her finishing from her husband, she knew she earned it.

“Learning drywall finishing was hard,” Britt said. “It was definitely not what I expected, and we hear that all the time from homeowners that try and take on their own drywall projects, and call us in to kind of save the day.

“It was definitely a big learning curve. You're not used to using those hand movements with finishing on the knives and stuff. It was definitely so different from anything I've ever done, but I instantly fell in love with doing it, working with my hands and making something from nothing … I learn something every day, still after three years. I think that's a good thing for any drywall finisher or really any trade, to continue on with learning and becoming better and just wanting to be your best self in every aspect.”

‘We just kept putting ourselves out there’ 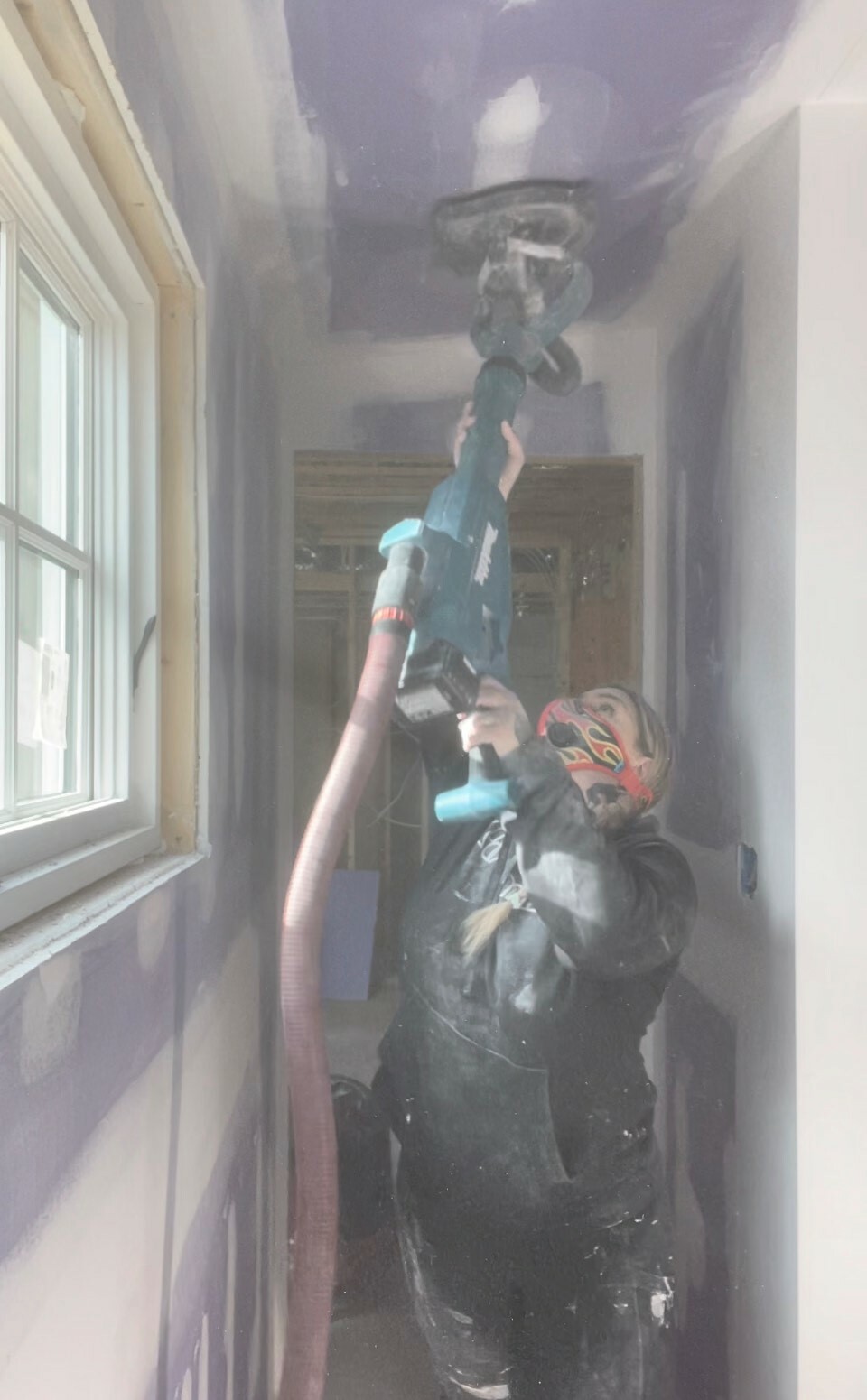 These days, Priluchnyi’s Drywall is booming, and growing by the day. Britt and her husband are constantly staying busy across southern Maine and New Hampshire, sometimes working together, sometimes going out on separate jobs. Whether they’re working on newly constructed homes, remodels or repairs, the Priluchnyi name has come to be known for their precision and perfectionism. Their growth has led to the team recently hiring on their first employee.

Part of the recipe for the Priluchnyis’ success comes from their embrace of social media. Britt adopted an “always be making content” philosophy, posting photos and videos to their social profiles regularly. Eventually, they earned a following (and a sponsorship from Columbia Taping Tools) — and that following turned into a major source of business, becoming a primary way that customers discovered their company.

“We just kept growing little by little,” said Britt. “Some of our videos that we were making just went viral, which was crazy — 2 million views on a few of our videos, which was so crazy to think that 2 million people would watch these drywall videos. That's so cool. That's basically what happened: we just kept putting ourselves out there making content and then one day it just took off and didn't stop. We continued to grow on there every day. I get most of our emails, phone calls, and sometimes even DMs, are clients that hire us from our Instagram feed, like, ‘I loved that video you did. That was so cool. I found you from your promotion on Instagram!’”

Women in Drywall: ‘I wish that this had been told to me when I was a kid’ 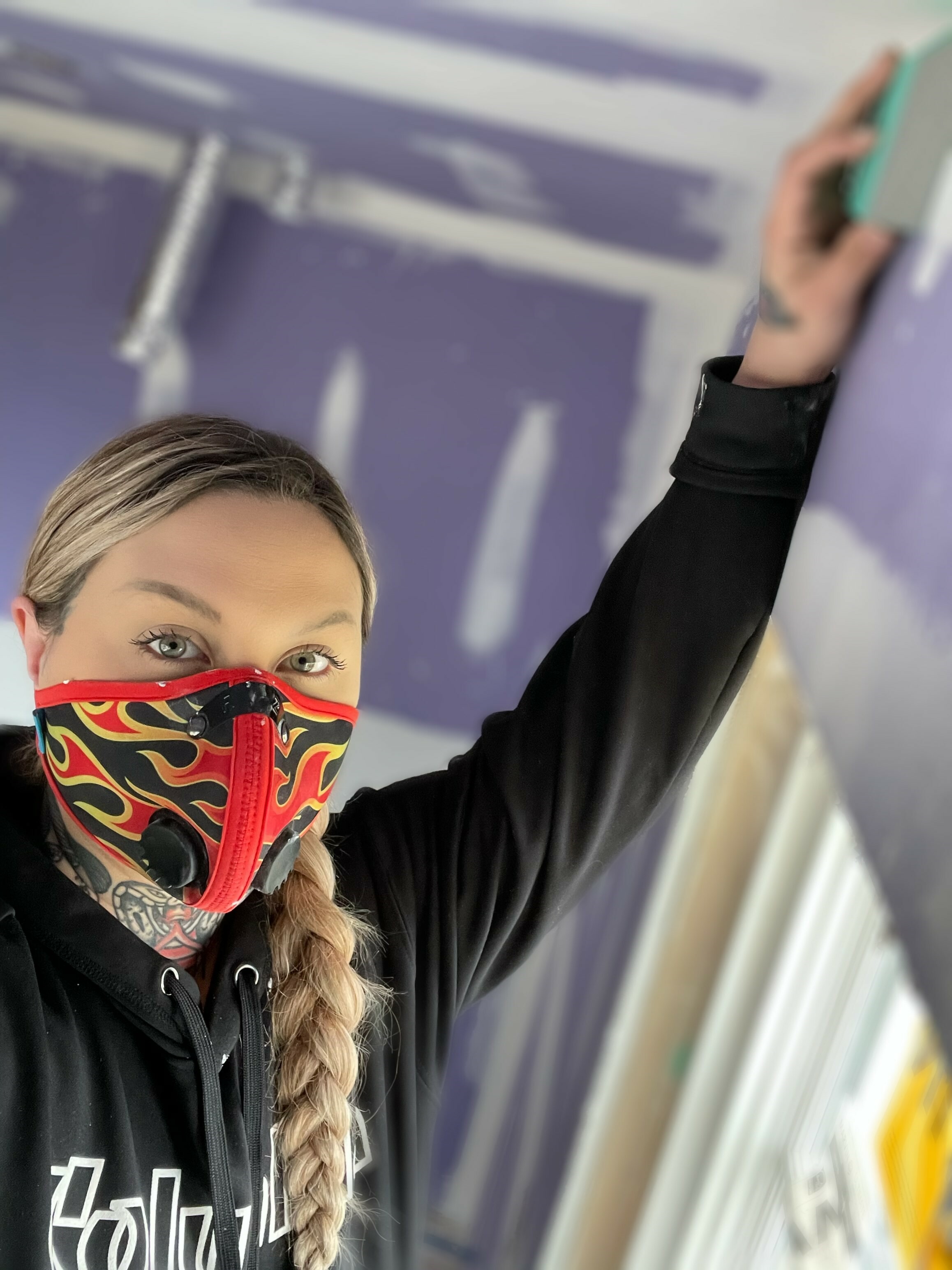 Even with the success of Priluchnyi’s Drywall in their area, being a woman in the trades doesn’t come without its unique set of challenges. For instance, Britt says many of the calls their company receives begin by automatically assuming her husband is the only one who knows their way around a sheet of drywall — despite their business being an equal partnership.

“I'll answer the phone, our work phone, and the person on the other end will be a male and be like, ‘Can I talk to the drywaller?’” Britt told us. “I'm like, ‘Yes, you are, this is the drywaller.’ They're like, ‘Oh, this isn't who I was expecting.’ You know? You're just like, who really cares who answers the phone? You called because you found our website with good reviews, you were trying to contact the drywall company that you liked what you saw online. So I hear that a lot. Every once in a while, we'll get somebody in person that tries to act like I don't know what I'm doing. They'll skip over asking the question to me and try and ask my husband. 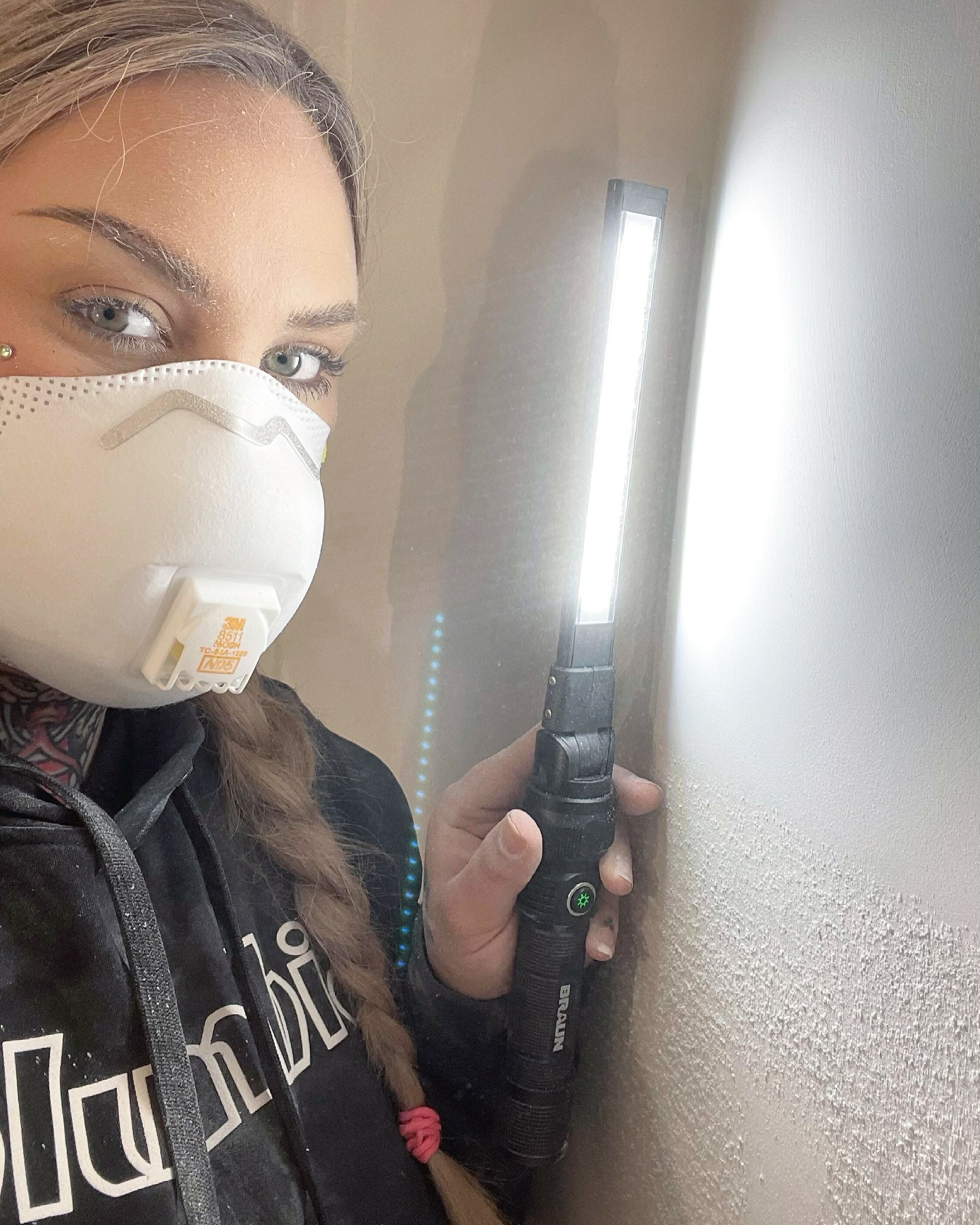 Britt Priluchnyi is someone who found the trades in a sort of roundabout way; she went to school for another field, dabbled in other areas, before she found it. And once she did, it fit her like a glove — plus, she was able to take everything she’d learned in her previous career, everything she’s learned in drywall, and use all of it to make her small business a success.

But maybe there’s another way forward for future women in drywall. Maybe, instead of requiring a personal connection into the industry, as Britt fortunately found, we can spread more awareness of the trades as a viable, lucrative career path for young women. In doing so, we could not only fulfill the professional lives of countless women, but make huge steps in closing the gap of skilled labor.

“I wish that this had been told to me when I was a kid,” says Britt. “I think about that all the time, because I remember being in school and your teachers would tell you, ‘Oh, you could go to school to be a veterinarian or a doctor or a nurse or a secretary or all of these things.’ Nobody ever mentioned to me anything about construction — not drywall, not framing, not even painting. Literally nothing in the construction field was ever mentioned to me when I was growing up. I hope that they're at least telling young girls in school about the construction trade now, that that's an option for them, because it's a great thing to be part of.”

Follow Priluchnyi’s Drywall on Instagram to keep up with all their delightful updates and impressive drywall work. And to keep up with every installment of Trim-Tex’s “Women in Drywall” series, hit the button below to sign up for our newsletter.