Working in the trades, no matter what your field is, it’s always helpful to have a partner alongside you — someone who has your back and can keep you smiling through the long, demanding days that are often part of the job. For Kaila Gilbert, that partner just happens to be her sister, Allison Gilbert.

Allison, 23, and Kaila, 24, are a taping team from Edmonton, Alberta, where their schedule stays jam-packed. These days, their work mostly takes them to large custom homes, but they’ve finished drywall in everything from office buildings to apartment complexes. The sisters told us that their father worked in construction his whole life, and soon after Kaila graduated high school, a taper friend of his took the elder sister under his wing as an apprentice. Kaila quickly found herself loving the work, and after about six months of professional taping, Allison joined her in the trade. Gilbert Taping was born.

“I think every site we go on, there's someone asking us if we're twins or not,” Allison told us. “We've gotten comments about it too, how it's great to see a team of just women, and find out we're not just working under a man — it's just the two of us. I think having each other has really helped. Kaila has a bit more experience than me since she started before me as well. It's nice to have each other and then she'll just show me how to do some stuff. When we learn new ways to do things, we'll help each other out as well. Being sisters and being close, that helps us not really worry about asking questions and all that. We just grow into it together, I think.” 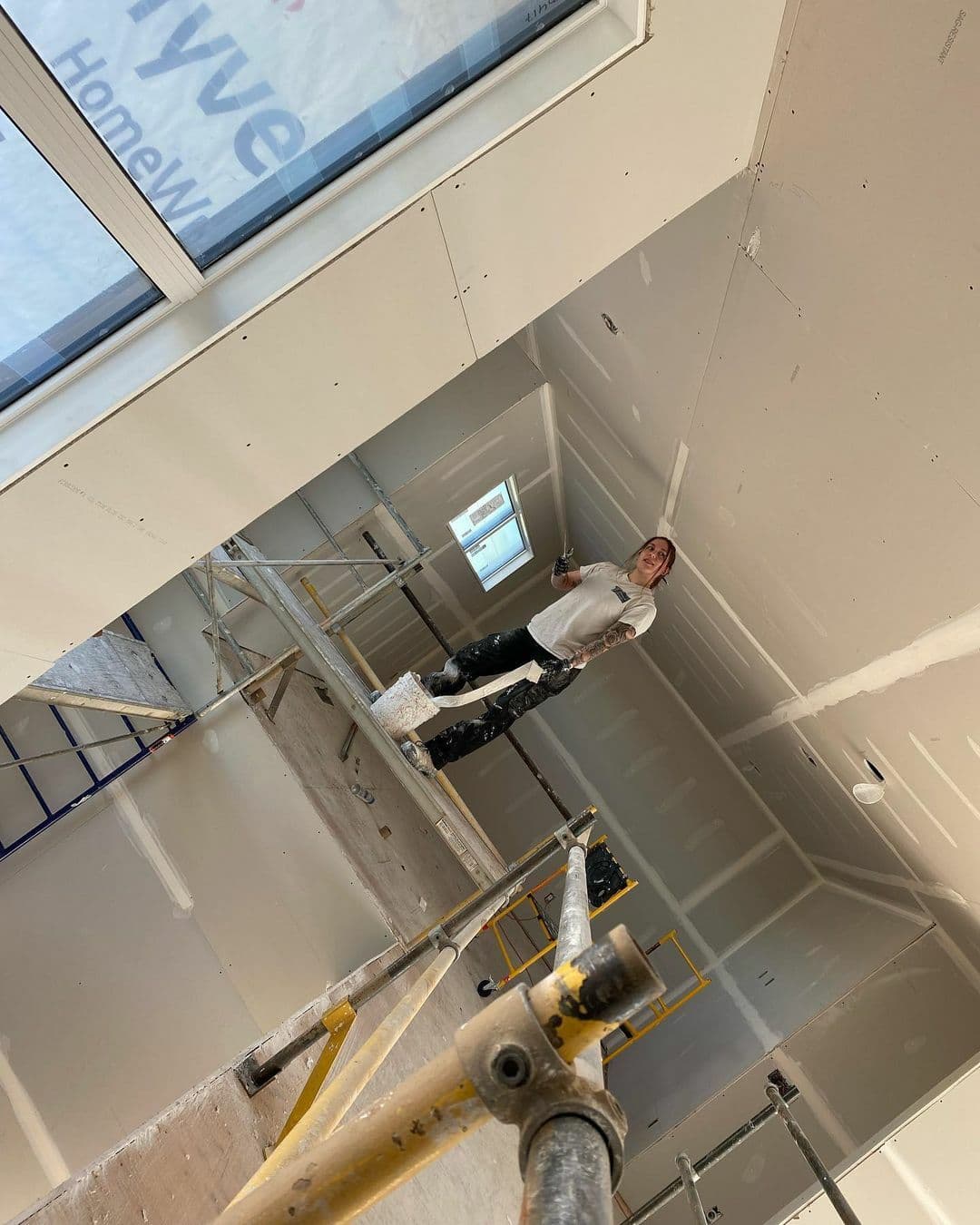 Having such a close working relationship isn’t only great for morale. As taping partners and co-owners of their subcontracting business, the sisters are able to double their efficiency by, more often than not, starting from opposite sides of an unfinished room and working their way toward the middle.

The Gilbert sisters haven’t only found success on the jobsite. Their social media following has skyrocketed lately, especially on TikTok, where Allison’s page (onto which they post most of their videos; “Usually it’s mainly Allison, to be honest,” says Kaila, who often prefers to be behind-the-scenes on the pair’s videos) has a whopping 255K followers at the time of writing. By the time you read this, there are probably many more.

Where many professionals in the industry may see using social media as a chore — something they can’t afford not to do — the Gilbert sisters view it as an opportunity, and as a digital billboard for their taping company. And, by using their platform for this purpose, they’ve gotten the Gilbert Taping name out there in a major way. 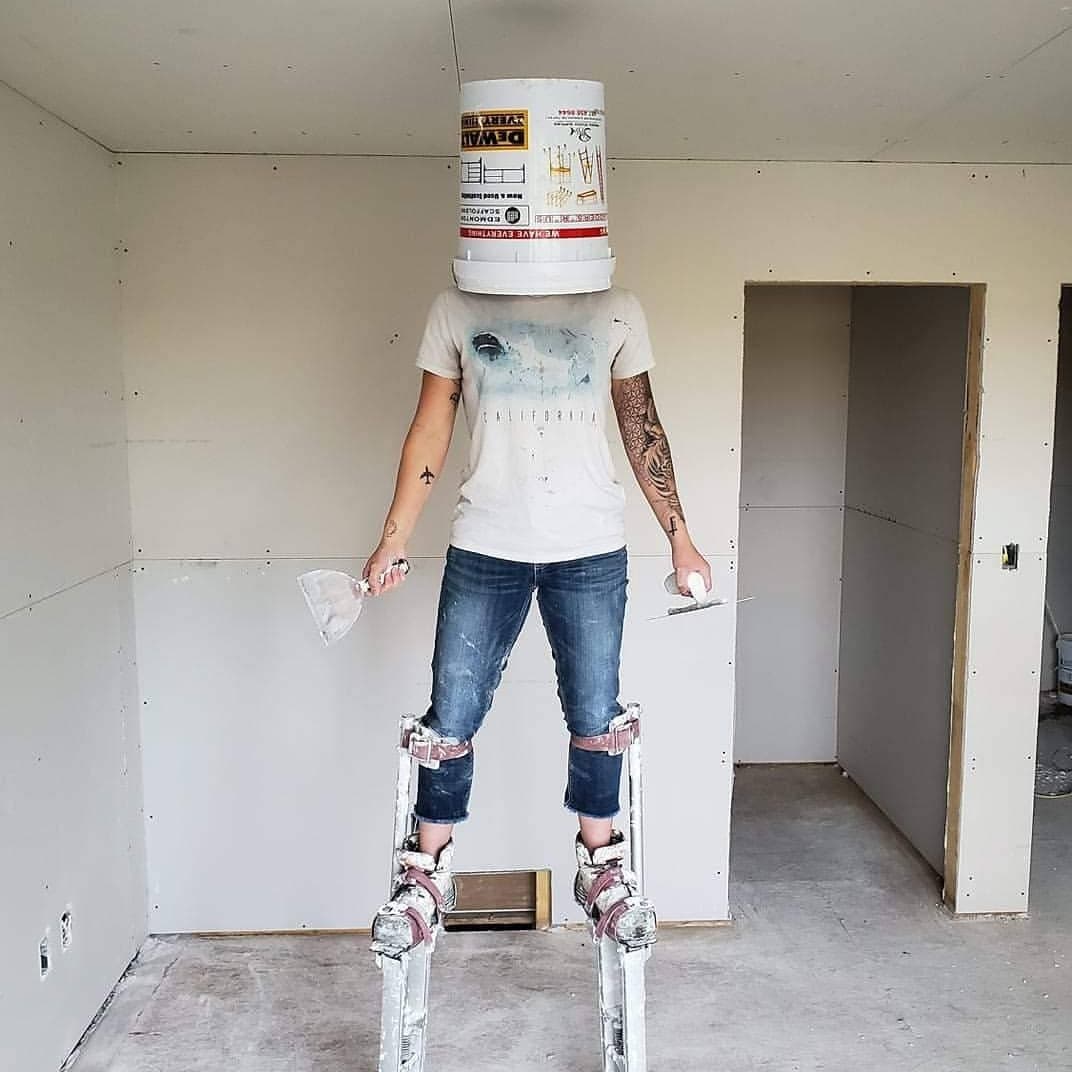 “We're a younger generation,” Allison explains. “We saw all the businesses online, and we just decided it would be a good idea to have our business on Instagram and use that more as a business card almost, to have people just look through that and see our work, rather than just giving business cards. It's a great tool to have. Then, after a while, TikTok became a thing, so we started posting these videos on there, and then we realized how much interest we were getting in our videos and stuff, so we just kept going with that.

“I think social media nowadays is really important for smaller businesses, obviously, as posting a lot really helps us get more interest. We're not running out of jobs here, but it's still a good thing to have. When it comes to that, we have so many people messaging us about wanting us to work for them too … We're just so busy already that we haven't really been able to take any of them, but we've had the opportunities.”

Taping presents the Gilberts with countless opportunities for video creation. While some aspects of the job — like learning how to use new tools, may require more preparation in order to shoot a quick TikTok — most of the time, they organically find spots in their day to take care of that side of their business. More often than not, they told us, it’s just a matter of propping a phone against a water bottle while they expertly execute some element of their finishing work, like spotting screws or feathering a butt joint.

“We just go with the flow and take a couple of videos as we go,” says Kaila. 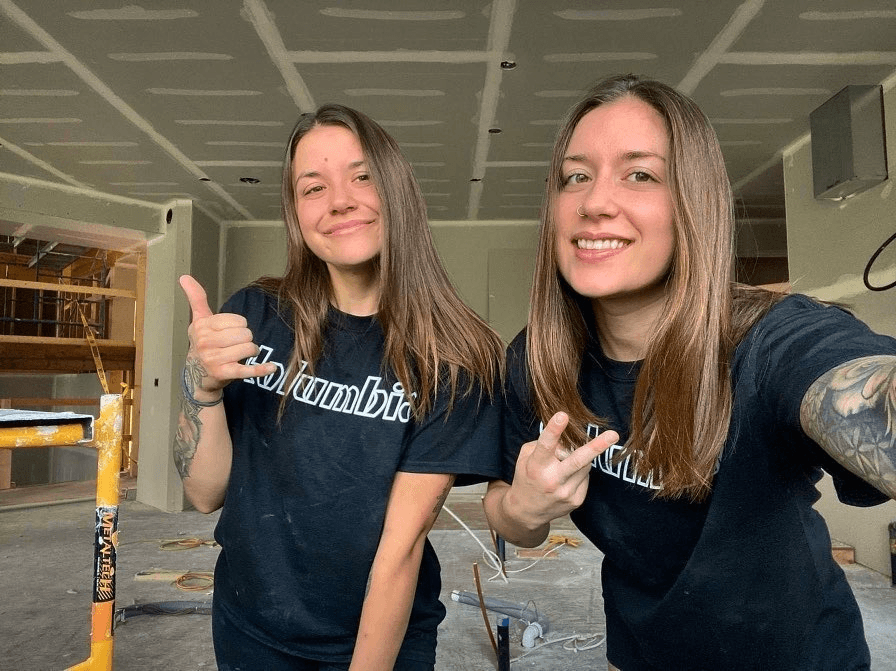 WOMEN IN DRYWALL: ‘WE KNOW WE’RE GOOD AT OUR JOBS’

When it comes to being a woman working in the trades, here again, it helps to have a partner by your side; for your average woman in drywall, she will frequently be the only one on a jobsite.

But, of course, there have still been plenty of challenges for Kaila and Allison to overcome, often in the form of being underestimated and undermined in the workplace. (Here, it also helps to subcontract for a company that will have your back.)

“We've had, obviously, on bigger sites like commercial, there's always men trying to hit on women — they don't seem to know how to function when women are on sites with them,” Kaila said. “But the company we subcontract for is really good at making sure that doesn't happen. The bosses usually tell the men to leave us alone if they see anyone coming our way.” 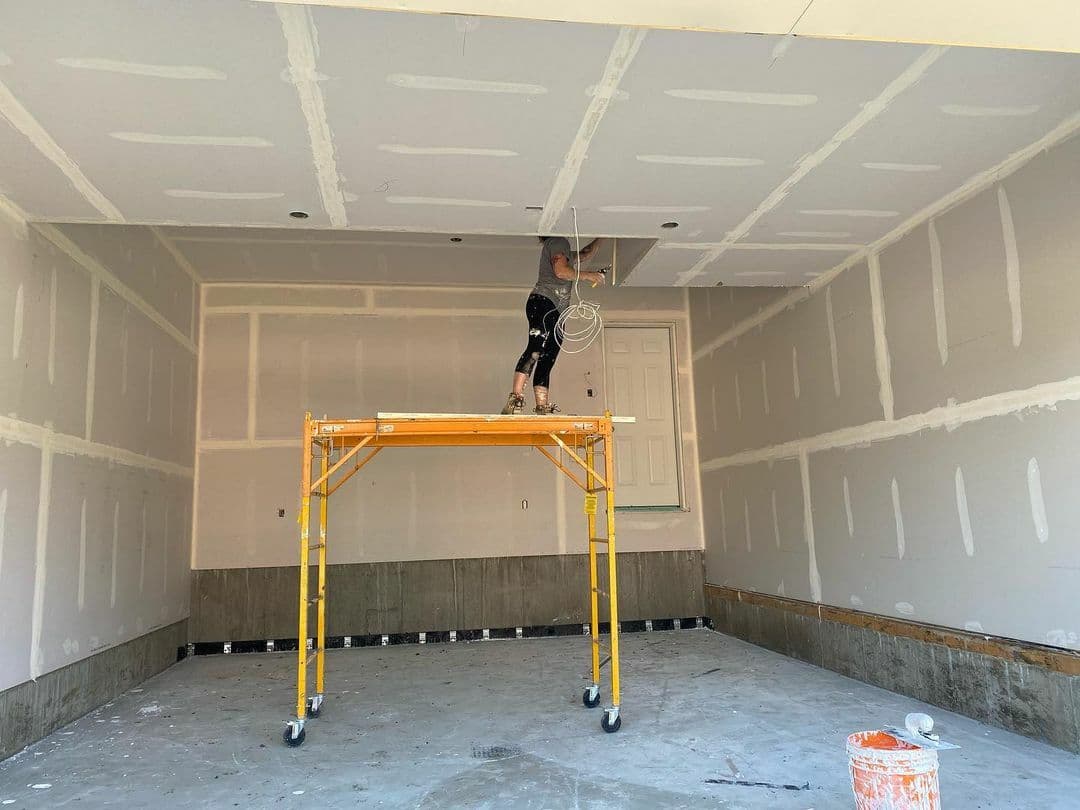 “We've had men on bigger sites also trying to tell us what to do,” Allison chimed in. “Just coming up to us, ‘Oh, you should put more water in your mud,’ and we're like, ‘We know what we're doing. We're fine. Thank you!’ We haven't had really bad, crazy experiences. Obviously, on social media as well, we get men telling us to get back in the kitchen and stuff like that. We just take it as a joke. Obviously, we know we're good at our jobs when we get told we're good at our jobs, very often, by everyone we work for.”

As more and more people like Allison and Kaila have found taping and drywall finishing to fit like a glove for them, the more it becomes clear that skilled trades can be an excellent career path for women to pursue. It’s been helpful for the sisters to have each other on the job, but any dedicated, hardworking woman can find a fulfilling and lucrative future in the trades. And hopefully one day, in the near future, it won’t be so uncommon to find more than one woman working on a single jobsite anymore — maybe they’ll be taping either end of a wall and working their way inward, like Kaila and Allison do. 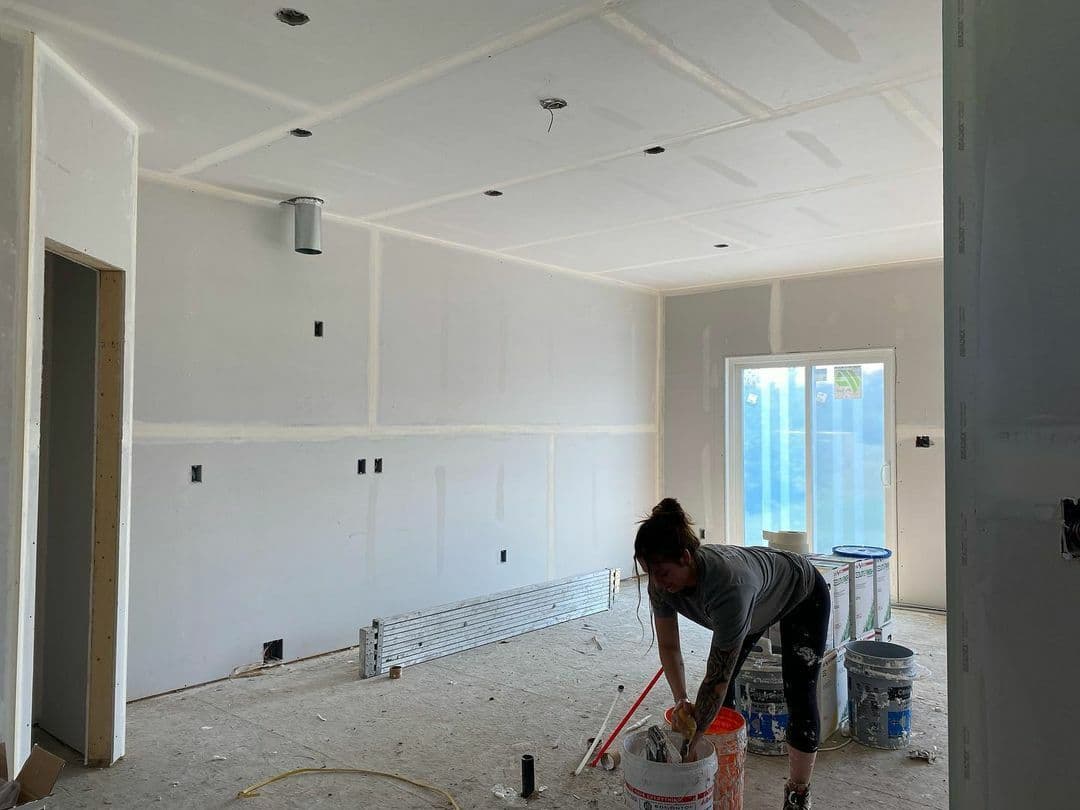 “As much as it's hard on the body and a more physical job, I think it shouldn't be scary for women to try it,” says Allison. “Of course, like the first few months for us, we were a little sore all the time, but you get used to it so fast. As long as you enjoy moving, it can be easy. It's almost like an art, so I don't see why women shouldn't do it.”

Be sure to follow Gilbert Taping on Instagram, and Allison on TikTok, to keep up with all their updates. The month of March is Women’s History Month, and Women in Construction Week 2022 takes place March 6-12, and Trim-Tex is celebrating women’s stories throughout the month. Check back for more features from Trim-Tex’s “Women in Drywall” series — hit the button below to follow us on Instagram, too, so you won’t miss out!