Why Firestopping Solutions for Wall Joints Are So Important 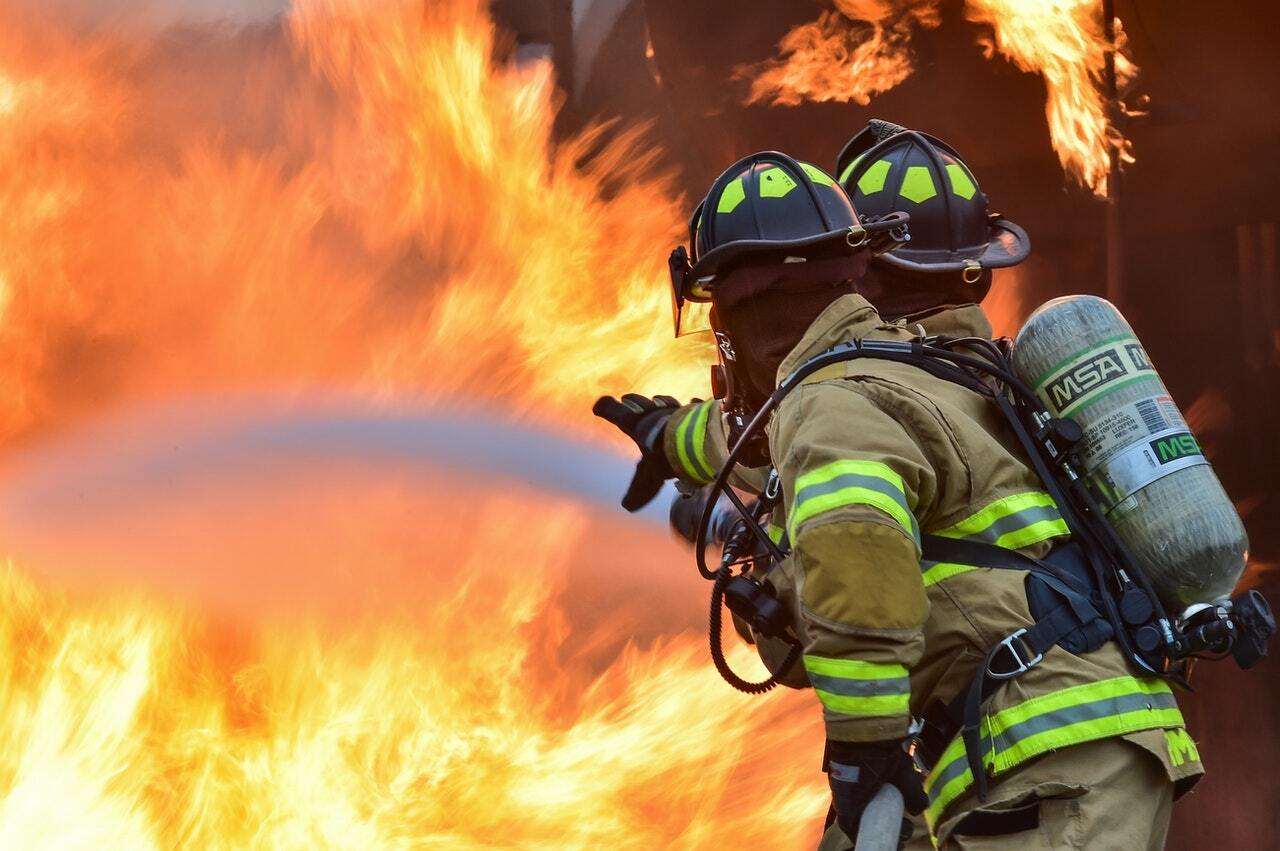 It’s not hard to understand why building codes and inspectors are so concerned with firestopping regulations — they’ve had proven results through the years of helping keep people safe. Dig into the little details, however, and you’ll start to get some headaches. Building codes get very specific on what you’re required to do to seal off even the tiniest of gaps in the joints of wall assemblies, gaps small enough for most people to not even notice. Plus, fire sealant can be a world-class pain in the neck, finicky to apply and prone to cracking over time. It’s no wonder that many contractors are going to stop and ask: are these kinds of building codes dictating strict firestopping solutions for wall joints really all that important?

Don’t give up, though, because, yes, it’s all incredibly important! Taking the time to seal off your head-of-wall joints (that is, the openings in or between wall assemblies that allow buildings to move slightly without damaging the wall, either due to natural 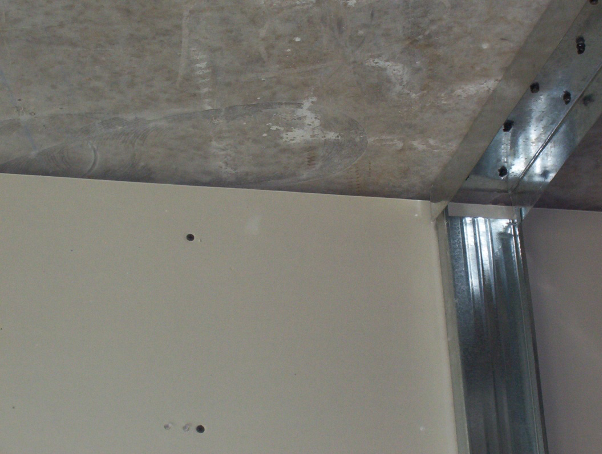 shifts over time or external forces, like strong winds or seismic activity) with firestopping materials could make all the difference to save lives, and stop the spread of smoke and fire to the entire building.

Trim-Tex has been working on ways to make the firestopping process easier on contractors — more on that later — but whatever the firestopping method you use may be, use it! No space is too small for smoke and fire to move through.

The Speed of Smoke

Imagine you’re in a perfectly square room, 20 feet long, 20 feet wide and 20 feet high. On one wall of that room, there’s a barely perceptible hole, no larger than the size of a pencil, which connects into the next room over. Now imagine that next room over is actively on fire. 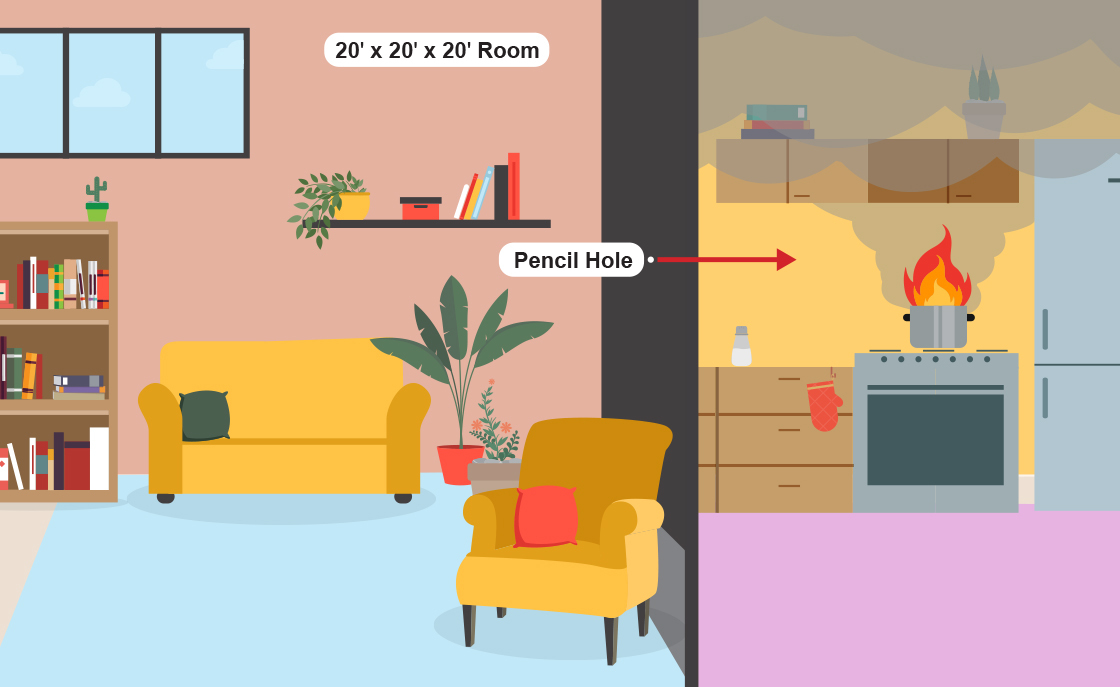 How long do you think it will take until the room you are in to be entirely filled with smoke, thick enough that you can’t see your own hand 18 inches in front of your face?

Faster than you might think — your room is going to be clogged with smoke in 3 minutes and 40 seconds. 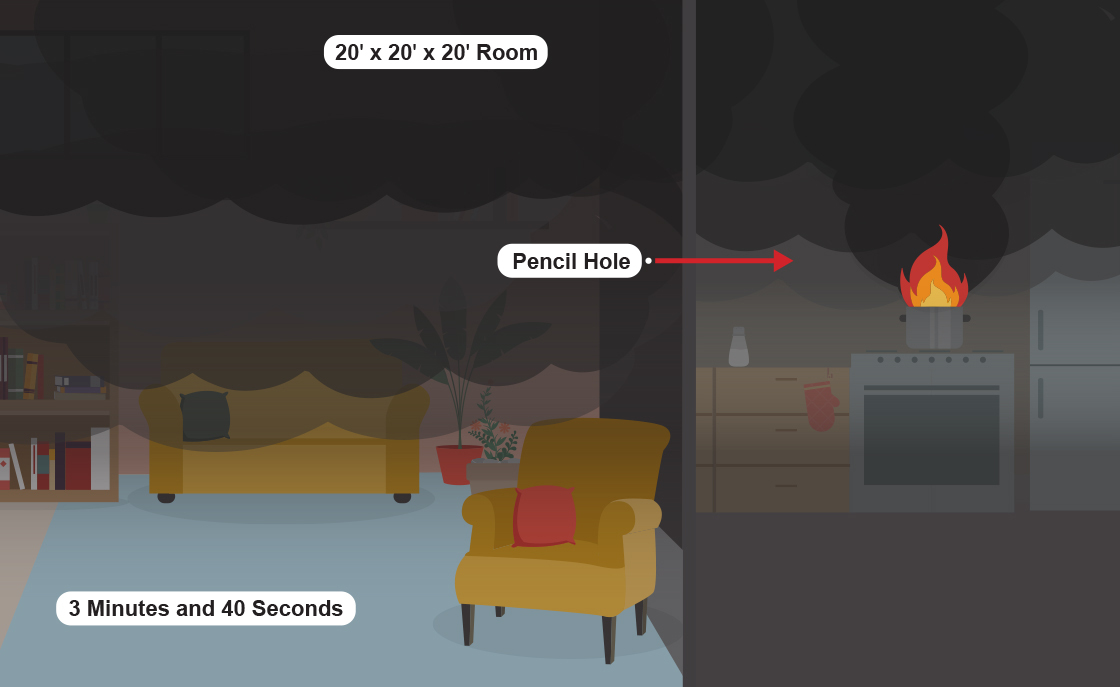 Multiply that tiny hole by all the gaps left in your head-of-wall joints that you don’t seal with firestopping materials; fire will find a way through them, and fast.

When we’re talking fire rated materials, there’s one major organization you have to make sure has tested and approved the stuff you’re about to use: UL Standards.

that it’s been rigorously tested by UL Standards and has met all their precise requirements. And they don’t mess around — to be UL fire rated, a head-of-wall assembly will be opened to the maximum allowable joint distance and stuck in a 1,8000-degree oven as part of its testing process. To meet test criteria, both the wall assembly and the joint materials will have to stop any passage of flames to the other, unexposed side.

The traditional method of firestopping has always been fire sealant, caulk or sprays. These materials, applied properly, will certainly get the job done. You simply apply the sealant in a wet state, wait for it to cure and then have the wall joint assembly inspected. 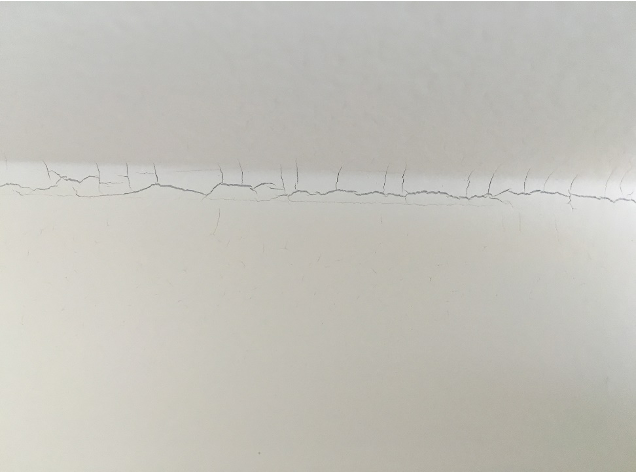 The trouble with fire caulk can be that it’s pretty easy to mess up, and difficult to inspect whether you used the proper dosage. And then there’s the fact that these solutions only provide short-term performance warranties — over time, sealants will harden and shrink, and slight building movement will cause it to crack, pictured right. At some point, there’s a good chance you’ll be called back to correct or reapply it. 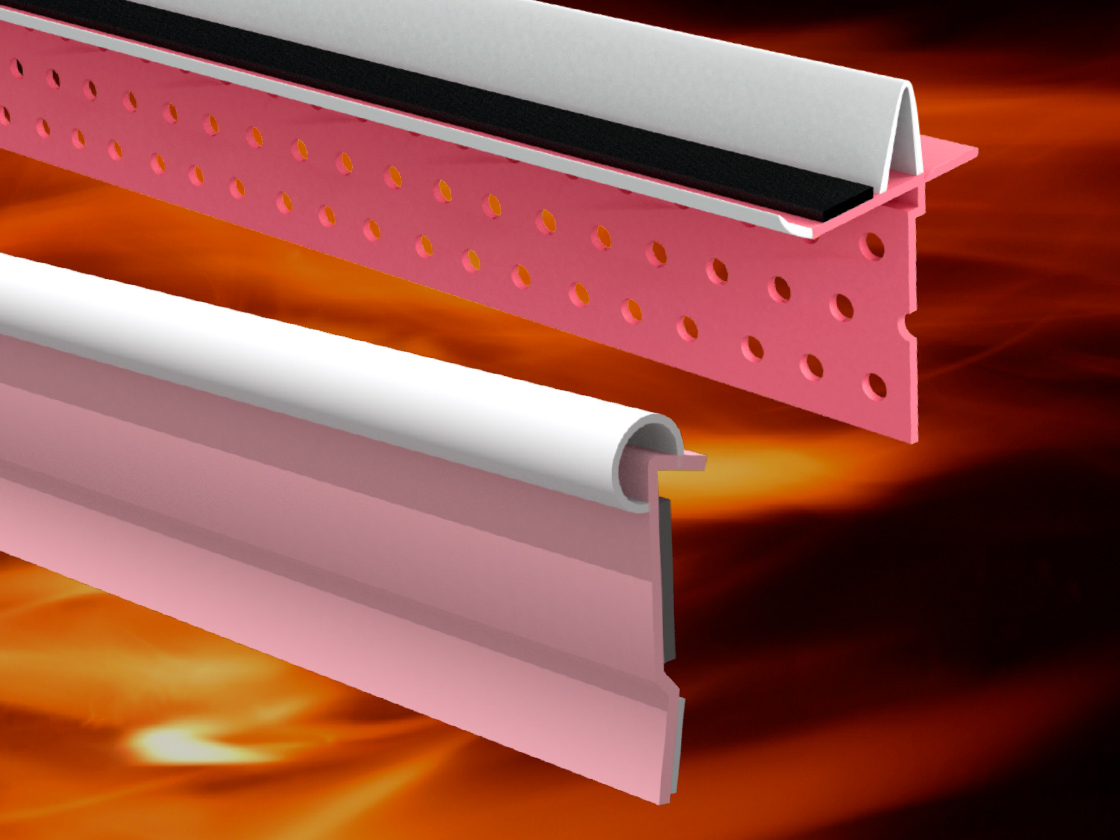 Some of us in the drywall finishing industry looked at the marketplace of firestopping solutions for wall joints and wondered if there was a better way of doing things. And that’s how the ball started rolling that led to the first-ever line of fire rated drywall accessories.

The first of these products, Fire Bead, is simply a variation on our Wall Mounted Deflection Bead — tinted an unmistakable pink during the manufacturing process, as all our UL fire rated products are, to make the inspector’s job easier — with an important addition: a strip of intumescent tape along its inside leg that expands to 30 times its size when exposed to fire. When you install Fire Bead to a concrete head-of-wall joint, that intumescent tape will slam the brakes on the spread of smoke and fire, while the vinyl bead’s flexible gasket compresses and expands to account for building movement.

There are, of course, other fire rated drywall solutions for other problems. Fire Gasket can be applied in a number of different ways, including in wall joints, 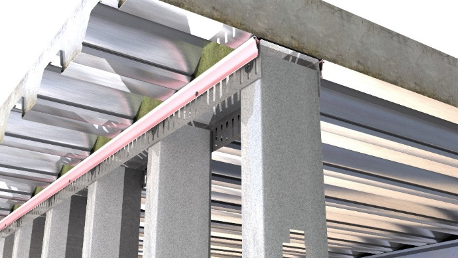 concrete, standard walls and, in particular, fluted decks. Then there’s the Fire Rated 093V Expansion Joint, which you can install in your wall’s control joint, in lieu of using a traditional expansion joint alongside firestopping backing materials. And quite soon, we’ll be rolling out Hotrod® XL, which features compressible firestopping foam, installs fast and provides three times more movement than fire sealant.

All these fire rated drywall accessories are already fully cured, so inspectors can come by as soon as they’re installed to the wall joint. They’re easier and faster to install than fire caulk, with fail-safe installation, and are designed to last for the entire lifetime of the assembly — sealant typically only has a performance warranty of a couple years. Add all these advantages up, and these new advancements in firestopping are a no-brainer for contractors and architects.

Wall joints may be something most folks don’t even think about — until something goes wrong, that is. Whatever the products you choose to use, make sure you are putting the proper care into these all-important parts of a building’s upkeep by investing your time and energy into proper firestopping solutions for wall joints.